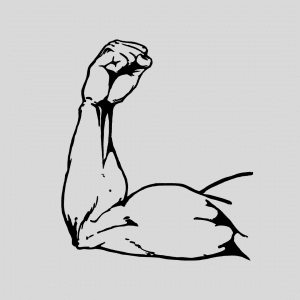 So, what does a muscle knot even mean? You have a ‘tight’ spot in your muscle, what do you call it? I used to call it a knot, or a trigger point, or a band. A trigger point is defined as a small muscle not, or taut band dotted in our body, caused by trauma, overload or postural stress.

I’m here to tell you there’s not actually much evidence for that. That’s not to say that you don’t feel any pain when your physiotherapist pokes or presses a certain spot, but the reason why you think these sore spots occur is not explained by a ‘trigger point’. 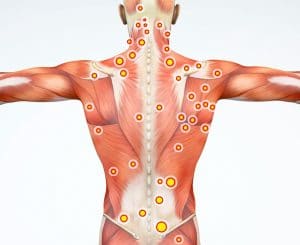 The theory of muscle knots being a cause of pain has been around (this time) since before I was born… around the 1980s. I like comparing evidence to my age to point out how ancient it is. 😛

The theory was first developed by a pair of doctors called Travell and Simons (you may have seen their thick trigger point books), and was developed widely by many practitioners despite no research or evidence to back it up. There’s actually no clear cut evidence that muscle knots exist, let alone are a source of pain!

So, more often than not, a ‘knot’ is felt as muscle spasm or increased tone.
What’s interesting, is that the world’s leading experts of trigger points, Travell and Simons who I mentioned earlier, have said that they have trouble finding them in patients! There was a study conducted by a man named Fred Wolfe, who had three groups of patients – (1) Those who had been felt for trigger points and been diagnosed as having them, (2) those diagnosed with Fibromyalgia (therefore had muscle pain but apparently no knots), and (3) a healthy control group – muscle knot and pain free. The examiners (people who looked for muscle knots) were then blinded, and they had no clue who was in what group! What’s interesting is that this study was completed in 1992! What’s that, another study before I was born? Yep.
I’ve also added more research in the references section that support this.

So, in summary, the most logical reason you have ‘sore spots’ isn’t actually a muscle knot. It must be acknowledged that all other theories, including the one I suggested above, also don’t have any robust evidence. So when you do feel a sore spot, just know that this is an area of tissue sensitivity, and not necessarily a muscle source.

Time to get researching!

Interexaminer Reliability of the palpation of trigger points in the trunk and lower limb muscles. – Hsieh et all. 2000.

Reliability of physical examination for diagnosis of myofascial trigger points: a systematic review of the literature. Lucas et al. 2009.

We are here to help! Booking Online is the most convenient way to lock in the clinician & time you want.